Students Learn How a Bill Becomes a Law 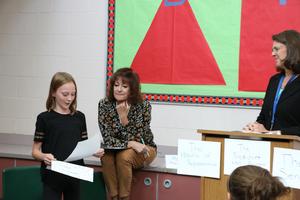 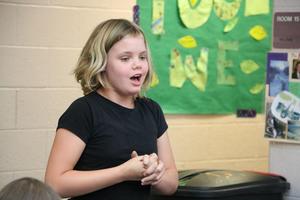 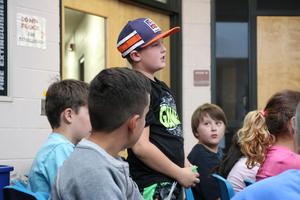 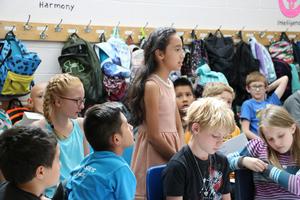 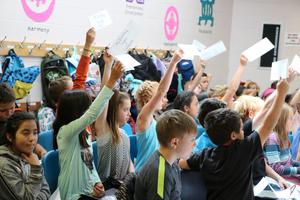 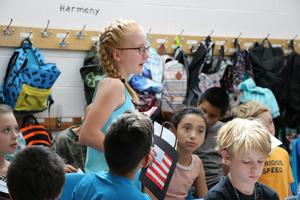 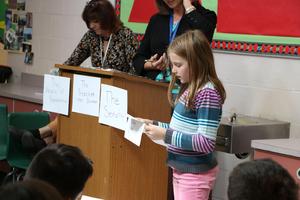 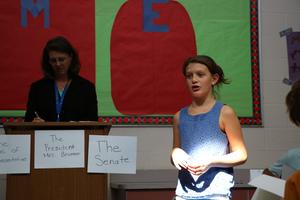 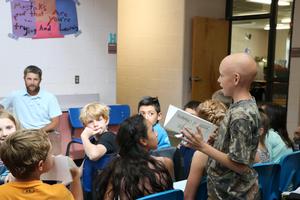 The Animas Valley Elementary Congress is close to passing legislation that could raise the swing height on 50% of playground swings and permit 5th grade students to use a microwave during lunch. These bills and this most recent session of “Congress” are part of a simulation that the 5th grade team of Shelli Tucker and Aaron Hyder are conducting with students as they study how a bill becomes a law.
Students began this unit of study as concerned citizens of the Animas Valley community, discussing issues that the students face at school, and brainstorming ways to address these issues. Each class, then chose four of the issues to resolve with legislation. Students formed committees to address each issue, beginning with research and ultimately writing a bill that could be presented to Principal Michol Brammer, or President Brammer as she is referred to in the congress simulation.
Once bills had gone through the editing process and were well-written, they were sent to the other side of congress. Ms. Tucker’s House of Representatives sent their bills for review to Mr. Hyder’s Senate, and vice versa. Congress members reviewed the proposed bills and gave feedback. Bills were returned to the committee that wrote them, and they were given time to reflect on feedback and make any changes.
The chambers eventually voted on which bills they felt had the greatest chance of being passed by President Brammer. The Agricultural Committee had their H.R. 99 - To bring back the microwave chosen in the House of Representatives and in the Senate the Committee on Environment and Public Works had S.413 - To adjust the height of the swings in order for fifth graders to play safely chosen.
These two new bills were presented to President Michol Brammer during a joint session of congress on Wednesday, September 27th. Rep. Dasha D. of Utah presented H.R. 99 and Sen. Norah J. of Kansas presented S. 413. Both committees took questions from President Brammer and fellow representatives and senators.
Rep. Lorelei H. responded to questions about whether or not 2nd grade students’ rights would be infringed if they were not permitted access to microwave since they have lunch at the same time, and if these younger students were responsible enough to use a microwave.
“As a group we felt like 2nd graders were not mature enough to use the microwave. But we could send home a parent permission form and set a deadline, and if they turn it in by that deadline, that means they are mature enough,” she said.
President Brammer requested that the committee present clear rules and guidelines for microwave use, a schedule for daily cleaning duties, and research on how use of the microwave may impact the current school lunch program before the she will sign the bill into law.
After S. 413 was presented, Sen. Annaliese D. answered questions about how safety would be insured for all students on a playground with mixed swing lengths. Sen. Davyn V. announced that he had a group of fellow congress members who were willing to form a volunteer police force to provide increased supervision during recess.
Once the Committee on Environment and Public Works had time to answer the questions from both the house and the senate, President Brammer gave her feedback. She asked the committee to return with a clear outline of the responsibility of the older buddy class to supervise younger swing users, a schedule for the volunteer swing supervision force, and information on who would adjust the swings and how they would be modified.
Students are anxiously awaiting to see which bills are passed after Ms. Brammer receives her requested information. What a great way to learn about our legislative process!